The Department of Posts (DoP) is likely to soon start a Rs 1,370-crore mega project that will allow India's 1.3 lakh postmen in rural regions to use network-connected handheld terminals for postal delivery.

The project, awarded last year to a consortium that includes state-run Telecom Consultants of India (TCIL), system integrator Ricoh India and Hyderabad-based VisionTek, which provides handheld devices, was delayed due to unavailability of components. 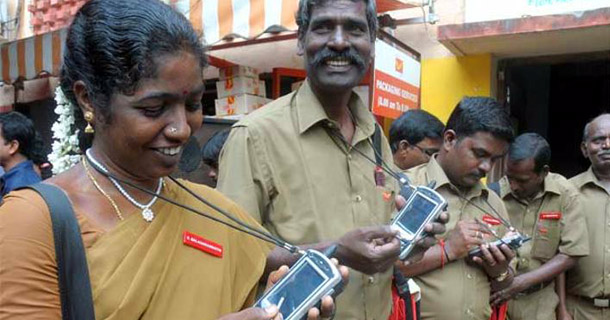 Big IT companies such as HP and Wipro were also in the running for the contract rolled out by the ministry of communications & information technology. "Based on terminal devices on network, the DoP initiative is likely to happen later this month. The project was delayed as the private company took time to deliver the components," TCIL's chairman and managing director Vimal Wakhlu told ET.
The devices will have a biometric module to authenticate an individual's identity using the Aadhaar number, solar-powered panel for charging terminals and a thermal printer to instantly print receipts.
"This is completely an indigenous project, including devices and components, and strengthens the concept of 'Make in India'," said Wakhlu.
The initiative is aimed at preventing postal losses and minimising procedural delays. The service will require a digital signature of the addressee that can be automatically transferred to a central server and an acknowledgement sent to the person.
TCIL is roping in state-owned telecom operator Bharat Sanchar Nigam Ltd for providing network connectivity.
The movement of postmen can be tracked using GPS on this device. It will help monitor the entire system and ensure more efficiency as post offices play a vital role in India's rural economy, Wakhlu said. "This programme is a step towards financial inclusion of the people of rural India as it will facilitate financial transactions. Money can be delivered and accepted through this device, with proper bank account and receipts delivery," he said.
Ricoh will act as the systems integrator, managing installations, maintaining hardware and supplying peripheral devices for the project.
"We have won the Rs 1,370-crore contract from DoP for the supply of hardware solutions under the department's modernisation initiatives. Ricoh will be providing maintenance services for rural ICT devices for a period of five years," said Ricoh India's managing director Manoj Kumar.
Source : Economic Times
Posted by All India Postal Employees Union – Group ‘C’ Tamilnadu Circle at 7:19 AM No comments: Links to this post

Empowered Committee Meeting likely on 11th June – Staff Side JCM, Nodal Officers from all Ministries to participate – Committee’s report may be handed over govt by June 30.

New Delhi: The Empowered Committee of Secretaries (CoS) headed by Cabinet Secretary P K Sinha processing the report of the Seventh Central Pay Commission is expected to meet on June 11 to finally wrap up its report on the remuneration of government employees.
It is reported that the secretaries panel will finally hear out all the stakeholders, including the Central ministries and Departments, and finalise its report, which will be handed over to the government on June 30.
Sources added that even the Prime Minister's Office is keen on a favourable pay hike for the central government employees, so the panel is likely to recommend a minimum salary at Rs 24,000 and the highest salary at Rs 2,70,000.
The 7th pay panel headed by AK Mathur had recommended the minimum salary at Rs 18,000 and maximum salary at Rs 2,50,000.
Sources added that the government is exploring options for meeting the additional payout over and above what was recommended by the 7th pay panel. The payout could be substantial with salary hike and arrears adding up to a Rs 1.02 lakh crore burden on government finances.
However, it seems that the government employees will have to wait more for the salary hike. Once the report moves from the table of the empowered group of committee to the cabinet, it is likely to take another month before the notification on pay hike will eventually come.
Even the Finance Ministry is keen that higher salaries reach government employees just before the festive season starting mid-August, as spurt in consumption during the festive period will have a domino effect on the economy.
Source: http://zeenews.india.com/
Posted by All India Postal Employees Union – Group ‘C’ Tamilnadu Circle at 7:16 AM No comments: Links to this post

Posted by All India Postal Employees Union GDS - (NFPE) at 02:49