Welcoming all GDS comrades to AIPEU-GDS, jointly functioning under the banner of NFPE.

Welcoming all GDS comrades to AIPEU-GDS, jointly functioning under the banner of NFPE.

Membership Verification notification is going to be issued soon.
Franchise your option in favour of  ALL INDIA POSTAL EMPLOYEES UNION – GDS (AIPEU-GDS)

I am very much thankful to the leaders of NFPE in respective Circles / Divisions for their earnest cooperation and support to form AIPEU-GDS union in the Divisions and Branches.

Our CHQ is getting fullest support and encouragement from all corners and confident to get number one position in the ensuing membership verification.

It is further requesting all the well-wishers, forming the AIPEU-GDS union in the divisions, please intimate the particulars of divisional secretary / convener immediately either by e-mail, mobile, SMS to the General Secretary to list out the same on the day itself so as to include in the list.
e-mail : aipeugdsnfpe@gmail.com / aipeugds@gmail.com
nfpehq@gmail.com
aipeugrc@gmail.com

The last date for submission of the list of ‘Authorized Representatives’ with particulars to the Directorate is 15-06-2016.

Hence do the needful and cooperate with CHQ for smooth processing for participation in the ensuing membership verification.

Copy of the letter from Directorate : 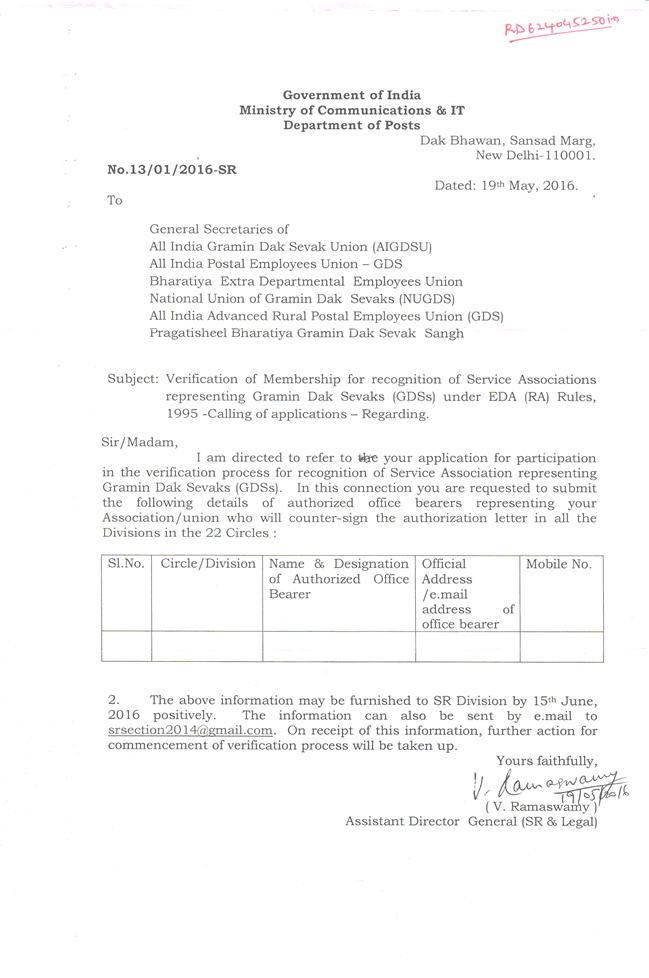 Posted by P. Pandurangarao at 8:31 AM
Email ThisBlogThis!Share to TwitterShare to FacebookShare to Pinterest
Posted by All India Postal Employees Union GDS - (NFPE) at 10:26