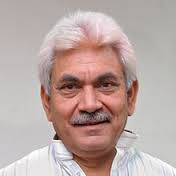 Shri Manoj Sinha has assumed the charge of Minister of State (Independent charge), Ministry of Communications in Sanchar Bhawan today i.e. 06.07.2016. In addition, he is already holding the charge of Minister of State for Railways. Shri Manoj Sinha is a Member of Parliament from Gazipur Lok Sabha Constituency, Uttar Pradesh. He was re-elected to Lok Sabha (3rd Term) in May, 2014. Earlier he was elected to Lok Sabha in the year 1996 and 1999.
A civil engineering graduate from Institute of Technology, Kashi Hindu Vishwavidyalaya, Varanasi, Uttar Pradesh, Shri Manoj Sinha has been active in social and political fields right since his student days. He has extensively worked for the welfare of people in rural areas specially far-flung and backward areas. During his parliamentary career, he has been Members of various Committees which include Member, Standing Committee on Energy and Member, Committee on Government Assurances.
He takes interest in sports like volleyball, kabaddi and special interest in agriculture.

Posted by All India Postal Employees Union GDS - (NFPE) at 09:25