India Post, the world's largest mail delivery network, is carving out a separate vertical to manage banking services, a move that will help it win RBI nod for interoperability of its ATMs with those of PSU banks.

India Posts, which had last year won a licence to operate a payment bank, has not been able to move much on starting operations.

"We wanted interoperability of the ATMs of Post Offices with other banks. RBI said we can allow it only if Post offices create a separate bank vertical because RBI has jurisdiction over only banks. The Postal department has taken a positive approach and created a separate vertical," a finance ministry official said.

The vertical will be based out of Bengaluru. Interoperability will allow individuals to transfer money from their Post Office account to their accounts in any bank. Besides, the Post Office ATMs can be used for withdrawal of money from the bank accounts.

The official, further, said the vertical will be created to operationalise the Post Bank licence and ultimately it would get merged suitably with the Post Bank.

The Postal Department is proactively setting up ATMs and micro ATMs in its rural post offices so as to tap its wide network for financial inclusion.

"RBI said this separate vertical of the Postal department is open for banking regulation. The RBI is favourably considering the option to provide interoperability," the official said.

"This will help in moving towards a less cash economy. Post Office has its branches even in the remotest areas where banking mitras or business correspondents cannot reach. Interoperability will allow leveraging the reach of Postal department," the official added.

With the formal structure of Post Bank likely to take around a year and half, the government wants to kick start its operations in parts by first putting into use the ATMs of Post Offices.

Payments banks can accept deposits (initially up to Rs 1 lakh per individual), offer Internet banking, facilitate money transfers and sell insurance and mutual funds by piggy-backing on existing retail or other networks. Besides, they can issue ATM/debit cards, but not credit cards.

The Postal payments bank, which will be run by Chief Executive Officer, will be professionally managed and there will be a officials from Department of Posts, Department of Expenditure and Department of Economic Services etc on its board.

Posted by P. Pandurangarao at 8:21 AM
Email ThisBlogThis!Share to TwitterShare to FacebookShare to Pinterest 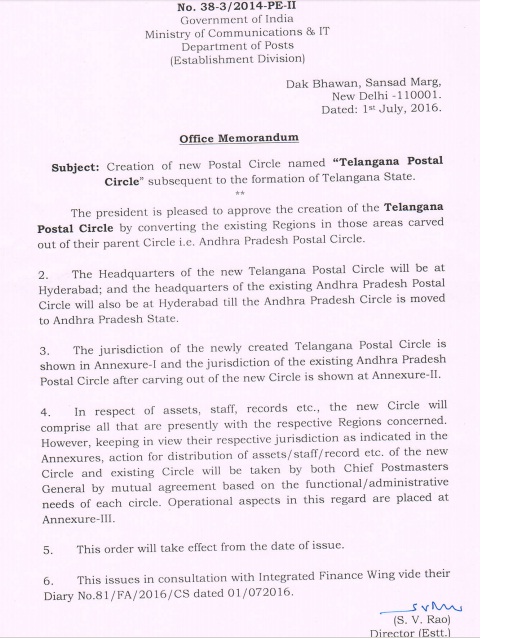 Posted by All India Postal Employees Union GDS - (NFPE) at 22:06