New Delhi: The Centre plans to amend the CCS (Conduct) Rules for baring its officials from making any criticism of government on social media, television and any other communication application. 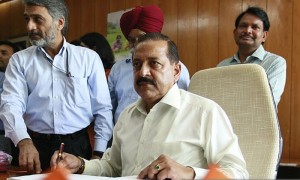 Minister of State for Personnel Jitendra Singh
Right now, the conduct rules do bar government officials from criticizing the government on a radio broadcast, communication over any public media, in any document, in any communication to the press or in any public utterance.
However, to make the rules specific to social media given presence of many officials on the same, a note is now proposed to be added to the All India Service (Conduct) Rules, 1968 saying: “The member of service shall also not make any such statement on television, social media or any other communication application. The word ‘Document’ may also include a caricature.”
This implies that any criticism of the government or its policies on social networking sites like Twitter and Facebook or on social networking groups like WhatsApp or through the officer drawing out a caricature will also attract disciplinary action under the Conduct Rules. The step comes after a committee constituted to review All India Service Rules has proposed certain amendments to the Conduct Rules.
Under the rules, a statement by an official is considered critical of the government if it has the effect of an adverse criticism of any current or recent policy or action of the Central Government or a State Government, which is capable of embarrassing the relations between the Central Government and any State Government or which is capable of embarrassing the relations between the Central Government and the Government of any Foreign State. All such statements by officials will not stand barred on social media.
In the context of social media, the government however wants to introduce a provision allowing government officials to participate in any public media including social media websites without the prior sanction of the government if the same is required by the officer as part of bonafide discharge of his duties. Many officials have joined Twitter and Facebook to communicate government decisions and the provision seems to be aimed at the same.
The government also plans to tweak an existing rule and plans to specify that government officials can take part in “simple and inexpensive entertainment events arranged by public bodies or institutions”.
In another tweak to the conduct rules, the government plans to introduce a provision whereby the official will be required to intimate the government of the purchase of an asset like automobiles or household equipment only if its value exceeds two months of his basic pay.
Inputs with ET
Posted by All India Postal Employees Union – Group ‘C’ Tamilnadu Circle at 8:15 PM
Posted by All India Postal Employees Union GDS - (NFPE) at 16:40