வேலை நிறுத்த நோட்டீஸ்  நகல்  மற்றும் கோரிக்கைகள்
NOTICE
Sir,
In accordance with the provisions of Sub Section (1) of Section 22 of the Industrial Disputes Act, 1947, we hereby notify that all the Postal/RMS/MMS/Administrative & Postal Accounts Employees and the Gramin Dak Sewaks (NFPE) will go on 1 Day  Strike on 15th February,2017.
The Charter of Demands is enclosed herewith.

CHARTER OF DEMANDS                PART-A
1.  Settle the demands raised by NJCA regarding modifications of 7th CPC recommendations as submitted in the memorandum to Cabinet Secretary on 10th December 2015. (See Annexure-I). Honour the assurance given by the Group of Ministers to NJCA on 30th June 2016 and 6thJuly 2016, especially increase in minimum wage and fitment factor. Grant revised HRA at the existing percentage itself i.e. 30%, 20% and 10%. Accept the proposal of the staff side regarding Transport Allowance. Settle all anomalies arising out of implementation of 7th CPC recommendations, in a time bound manner.
2.  Implement option-I recommended by 7th CPC and accepted by the Government regarding parity in pension of pre-2016 pensioners, without any further delay. Settle the pension related issues raised by NJCA against item 13 of its memorandum submitted to Cabinet Secretary on 10th December 2015. (See Annexure-I).
3.  Scrap PFRDA Act and New Pension System (NPS) and grant pension and Family Pension to all Central Government employees recruited after 01.01.2004, under CCS (Pension) Rules 1972.
4.   Treat Gramin Dak Sewaks of Postal department as Civil Servants, and extend all benefits like pay, pension, allowances etc. of departmental employees to GDS. Publish GDS Committee report immediately.
5.  Regularise all casual, contract, part-time, contingent and Daily rated mazdoors and grant equal pay and other benefits. Revise the wages as per 7th CPC minimum pay.
6.  No Downsizing, Privatisation, outsourcing and contractorisation of Government functions.
7.  Withdraw the arbitrary decision of the Government to enhance the bench mark for performance appraisal for promotion and financial upgradations under MACP from “GOOD” to VERY GOOD” and also decision to withhold annual increments in the case of those employees who are not able to meet the bench march either for MACP or for regular promotion within the first 20 years of service. Grant MACP pay fixation benefits on promotional hierarchy and not on pay-matrix hierarchy. Personnel promoted on the basis of examination should be treated as fresh entrants to the cadre for grant of MACP.
8.  Withdraw the draconian FR 56 (J) and Rule 48 of CCs (Pension) Rules 1972 which is being misused as a short cut as purity measure to punish and victimize the employees.
9.   Fill up all vacant posts including promotional posts in a time bound manner. Lift ban on creation of posts. Undertake cadre Review to access the requirement of employees and their cadre prospects. Modify recruitment rules of Group-‘C’ cadre and make recruitment on Reginal basis.
10.  Remove 5% ceiling on compassionate appointments and grant appointment in all deserving cases.
11.  Grant five promotions in the service carreer to all Central Govt. employees.
12.  Abolish and upgrade all Lower Division Clerks to Upper Division Clerks.
13.  Ensure parity in pay for all stenographers, Assistants, Ministerial Staff in subordinate offices and in all organized Accounts cadres with Central Secretariat staff by upgrading their pay scales. Grant pay scale of Drivers in Loksabha Secretariat to Drivers working in all other Central Government Departments.
14.  Reject the stipulation of 7th CPC to reduce the salary to 80% for the second year of Child Care leave and retain the existing provision.
15.  Introduce Productivity Linked bonus in all department and continue the existing bi-lateral agreement on PLB wherever it exists.
16.  Ensure cashless medical treatment to all Central Government employees & Pensioners in all recognized Government and Private hospitals.
17.  Revision of Overtime Allowance (OTA) and Night Duty Allowance (NDA) w.e.f 01.01.2016 based on 7th CPC pay scale.
18.  Revision of wages of Central Government employees in every five years.
19. Revive JCM functioning at all levels. Grant recognition to the unions/Associations under CCS (RSA) Rules 1993 within a time frame to facilitate effective JCM functioning.
20. Implementation of the Revised Pay structure in respect of employees and pensioners of autonomous bodies consequent on implementation of CCS (Revised Pay) Rules 2016 in respect of Central Government employees and pensioners w.e.f. 01.01.2016.
21. Implementation of the “equal pay for equal work” judgement of the Supreme Court in all departments of the Central Government.

CHARTER OF DEMANDS                      PART-B
1.    Settle the demands of various cadres of Postal department relating to 7th CPC recommendations submitted to Secretary, Posts in memorandum dated 08.12.2015.
2.    Implement cadre restructuring in all remaining cadres in the Department of Posts and settle the residual issues arising at implementation stage. Finalize RRs in MMS Cadres.
3.    Grant Civil Servant status to Gramin Dak Sevaks and grant all benefits of departmental employees on pro-rata basis./Publish GDS Committee  Report.
4.    Revision of wages and payment of arrears from 01.01.2006 to all casual, part-time, contingent and daily-rated mazdoors and regularization of services.
5.    Fill up all vacant posts in all cadres including promotional posts and GDS.
6.    Conduct membership verification of Gramin Dak Sevaks and declare the result of the verification already conducted among departmental employees during 2015.
7.    Revision of OTA & OSA and fixation of norms for CRC/Speed post and Parcel in RMS and FMC for Postman Cadre.
8.    Settle problems arisen out of implementation of CSI and CBS.
9.    Grant of upgraded 3050 pay scale to Postmen w.e.f. 1.1.1996 as per Supreme Court Judgment.Change of RRs of Postmen/MTS.
10.  Withdraw “Very Good” bench mark condition for MACP and future increments and holding of DPCs timely..
11.  Grant of S D.A. & HCA to the Assam & NE & remove discrimination..
12. Problems arisen out of demonetization Scheme and grant additional remuneration of full       day salary for Sunday/Holiday and hourly rate for extended duty hours. Provide proper infrastructure including fake currency detector and counting machines. Not to direct the officials to make good the loss where fake currency machines are not provided.
13 Stop Sunday/Holiday working completely.
14. Discussion on     Memorandum of AIPSBCOEA.
15. All COs/ROs & DPLI office Kolkata may be  allowed  to function CPCs.
16. Finalization of Recruitment Rules of AAO Cadre in Postal Accounts and review of result for SC/ST -2012 Exam.
17. Repairing and Maintenance of Departmental Buildings.
18.Payment of revised  wages to the GDS/ Casual Labourers  substitutes  who are working on the  posts of Postmen, Mail guard, MTS etc,
19. Stop Trade Union victimization.
20. Declaration of Result of LGO & other LDCEs in remaining Circles. 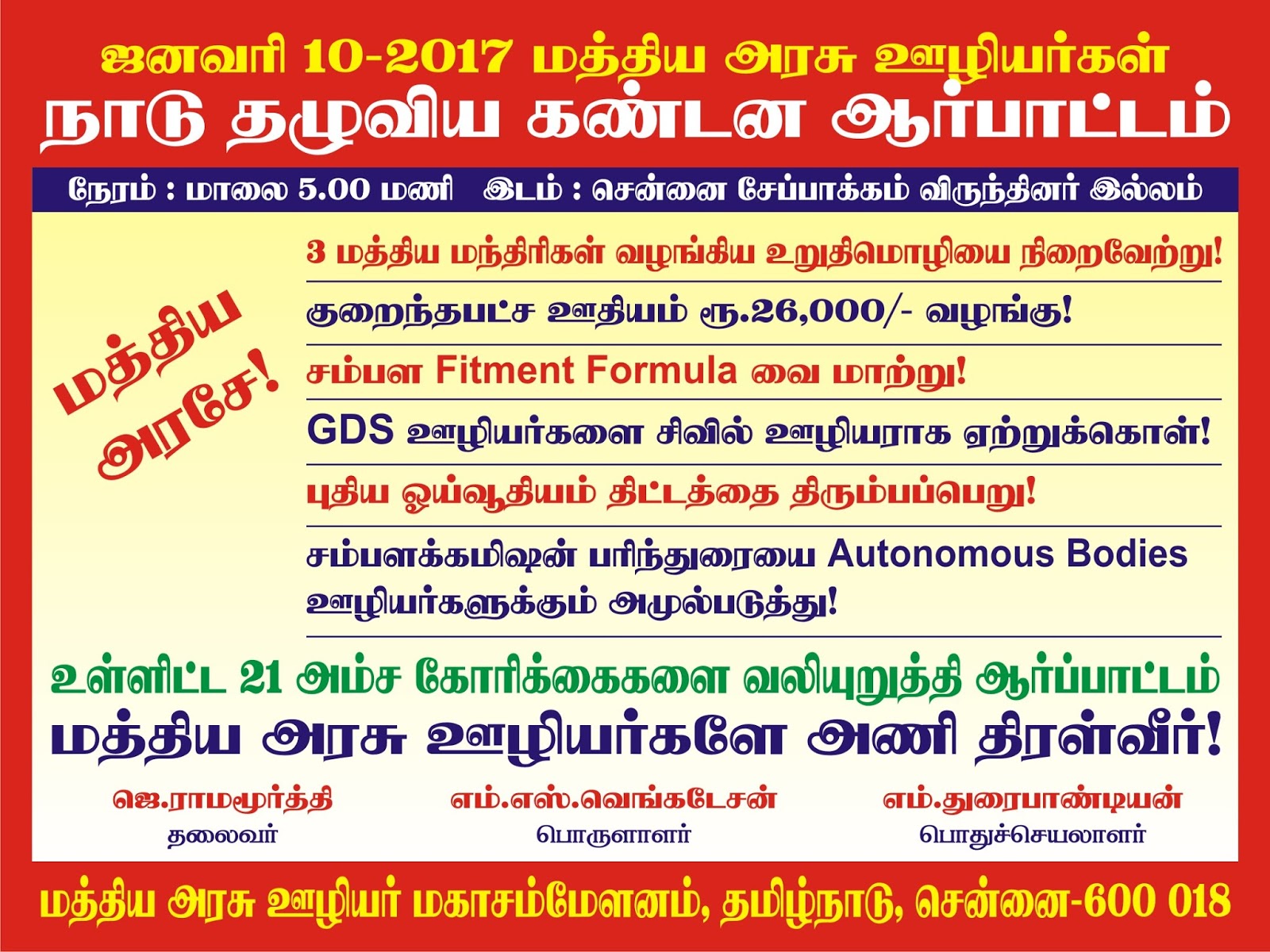 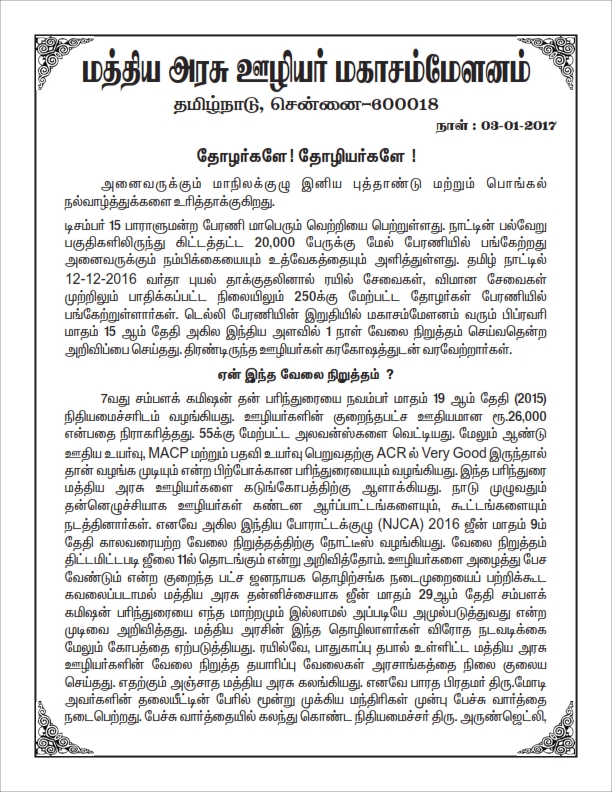 Posted by All India Postal Employees Union GDS - (NFPE) at 09:39