Why IPPB Gets More Demand than other Payment Banks 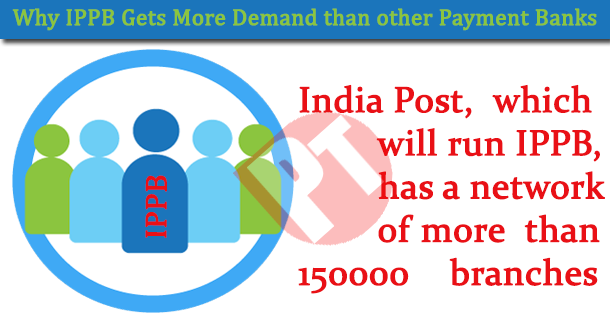 In total, 50 companies including Barclays Bank, Deutsche Bank, Citibank and several state-owned banks have sent proposals to the department of posts for a partnership. The International Finance Corporation, part of the World Bank Group, has offered to be an equity partner. Money transfer company UAE Exchange is ready to open vostro (in which the Indian bank will manage a local account corresponding to one held in a foreign bank) accounts for rupee currency, targeting Indians living in West Asia.

Like other payments banks, IPPB will target financially excluded customers such as migrant workers, low-income households and tiny businesses. It will not lend money and, as a result, will be shielded from the risks that conventional banks are exposed to. And it will have a huge offline presence to complement its online one, for which the department of posts has already identified a core banking solution (the software that runs banks).

The department of posts was among the 11 entities that got an in-principle approval from the Reserve Bank of India (RBI) to start a payments bank. Three entities have surrendered their licence after they discovered the business is characterized by high volumes and low profit margins. For India Post, though, the business will be a natural extension.


India Post already accepts money from customers as part of its post office bank accounts and long-term deposit schemes such as National Savings Certificate. Its money order service is widely used by migrant workers to remit money back home.

It will also not have to gain trust of customers like its competitors, especially in the rural areas, as the local postman is still an integral part of the day-to-day lives of the rural populace.

The Union cabinet approved a proposal to set up IPPB with a corpus of Rs.800 crore. Communications and information technology minister Ravi Shankar Prasad said IPPB has plans to open 650 branches and will be operational by September 2017.

“IPPB will be a game changer for rural and suburban India. We had initially planned to roll out operations in three years. But the Prime Minister has given us a challenge to start operation in a year’s time. All grameen dak sevaks in rural post offices will be given hand-held devices by March 2017 and by September 2017, all 650 branches of postal payments bank will become operational,” Prasad said.

The payments bank will begin with Rs.400 crore equity capital and Rs.400 crore as grant from the government. IPPB plans to set up 5,000 automated teller machines as well, he added.

N.C. Saxena, former secretary of the erstwhile Planning Commission, said that financial institutions are sensing the potential that IPPB has in terms of its connectivity and reach.

“In today’s digital era, telegrams and post cards are no longer used. But India Post has a vast infrastructure already in place and a very good rural network. Besides the 1.5 lakh post offices, they also have a network of temporary post offices—basically one-person post offices—that take care of the last-mile connectivity in rural areas,” he said, adding that financial institutions both in the private and public space cannot hope for a partner with a better reach in rural areas.

“But the post office payment bank will have to quickly move to an online platform to make it easier for customers to access their accounts and conduct transactions,” Saxena said.
Posted by All India Postal Employees Union GDS - (NFPE) at 08:03